This is an edited version of a speech given by Principal Commissioner for Children and Young People, Liana Buchanan, at the Home Stretch campaign launch on 22 May 2018.

In my job, I get to meet and talk to a lot of young people in out-of-home care. They raise all kinds of issues with me. But the single, most common question they ask is: 'Why does care cut off at 18?' – Liana Buchanan 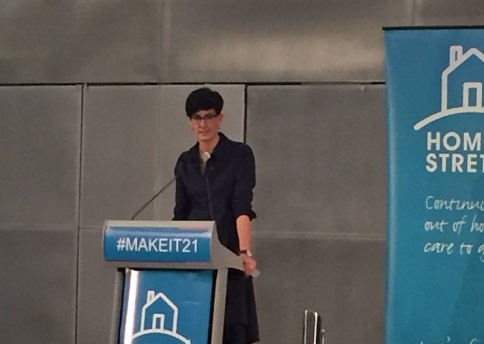 I would like to acknowledge the traditional owners of the land on which we meet today, the Wurundjeri people of the Kulin Nation, and pay my deep respects to Elders past, present and emerging.

I acknowledge the harms done to the First Peoples of this land, the legacy of which continues today. One in five children in out-of-home care in this state is Aboriginal. Aboriginal children are 16 times more likely to be in care than their non-Aboriginal peers. That means that every disadvantage, every negative impact, every poor outcome we are talking about today—like so many other harms—is disproportionately suffered by Aboriginal kids.

As Victoria’s Commissioner for Children and Young People, it is my job to promote improvements to policies and practices that affect children and young people—particularly those who are vulnerable and marginalised.

In two years of closely scrutinising how we treat children and young people affected by violence, neglect and trauma it’s fair to say I have seen a lot we need to improve. In many instances, the policy issues I advise on are complicated and the solutions are contested.

Issues around how to improve our vexed residential care system, how to stop children in care being moved from placement to placement, how to stop our care system from contributing to the criminalisation of children’s trauma—these are just some of the critical issues.

These are the types of issues on which reasonable minds can differ on the best way forward. Sometimes cost, complexity and politics can limit what can be achieved quickly, or at all. But sometimes there are policy proposals where the need for reform is so evident, the evidence is so unequivocal and the solution so clear and attainable, that there is simply no justification for not acting.

The Home Stretch campaign’s proposal for the State to continue to offer care, accommodation and support to young people in out-of-home care until they are 21 (rather than cutting it off at 18) is one of those policy proposals. It is a no brainer, a change that simply must be done.

Most young people have the option of deciding when they are ready to leave home and get plenty of emotional, financial and practical support when they do. They also enjoy the safety net of being able to return to the family home if things go wrong. But for young people who need and deserve the most support in making the transition to adulthood, this isn’t the case. They are often on their own.

We expect some of our most vulnerable young people—those who have had some of the very worst experiences in childhood—to begin ‘transition planning’ from the age of 15 years, so they can live independently from the age of 18. Many of these young people have limited or no support systems behind them, yet we expect them to find somewhere appropriate and affordable to live, establish a home, find the means to support themselves financially (ideally while progressing further education or training) and be prepared and equipped to manage all the adult vicissitudes of life without support. We are expecting this of young people who have already experienced a level of trauma and disruption most of us cannot imagine.

In my job, I get to meet and talk to a lot of young people in out-of-home care. They raise all kinds of issues with me. But the single, most common question they ask is: “Why does care cut off at 18?” Some of these young people are angry, some are genuinely and heartbreakingly scared, some are worried because they have carers they know will struggle to continue to provide them with support.

Then there are young people who, in adolescence, are still experiencing major challenges because of their experiences in childhood so far: mental health problems, substance abuse issues, sexual exploitation, acting out in a whole range of ways and sometimes, criminal offending. I meet some of these young people because they end up in youth justice custody. Even more sadly, I learn of others after they’ve died through suicide or other risk-taking behaviour and I am reviewing their circumstances, and the ways in which the system has let them down, through our child death inquiry function. Why we would abandon these young people at 18, or in fact much earlier—because that’s the message they get—is quite simply beyond me.

Let’s be clear: the concept of an ongoing duty of care is not foreign in Victoria. The Children, Youth and Families Act 2005 already reflects it. It states the Secretary of the Department of Health and Human Services has the responsibility to provide services to support a person under 21 years to gain the capacity to make the transition to independent living. It describes the kinds of services that may be provided to support transition including financial, employment and accommodation assistance, education and training, counselling and support. All things that we would reasonably expect should continue to be provided to a young person. But the provision of services and financial support, the so-called “responsibility” is entirely discretionary. The Act is clear that these provisions create no right or entitlement enforceable by law. That, quite simply, needs to change.

The benefits associated with extending support for care leavers is obvious. All the international evidence surrounding extending care to the age of 21 demonstrates that it greatly increases the likelihood of further study, employment, stable living arrangements and social cohesion. It greatly reduces the likelihood of homelessness, interaction with the criminal justice system, chronic unemployment and unwanted pregnancies, and the list goes on.

We know this from the many jurisdictions that have already taken this step —jurisdictions such as the United Kingdom and the United States. The costs associated with government offering this additional support are modest, and they’re vastly offset by the savings that come from preventing the poor outcomes I’ve just described. The Tasmanian and South Australian governments have recognised this and have committed to legislating and funding care to the age of 21. Victoria, as a state that prides itself as a leader in evidence-based policy, must commit to the same.

The State has removed these children and young people from their families, in the name of protecting them and acting in their best interests, to keep them safe and to give them a better chance to thrive. When it comes to turning these young people’s lives around, we must finish what we have started.